Senator WATERS (Queensland) (22:11): It is good to be back in the chamber after spending last week on the other side of the world, on a self-funded trip to Brazil for Rio+20, the UN Conference on Sustainable Development. It was held on the 20th anniversary of the first Rio Earth Summit in 1992, where the Australian government signed the Rio declaration and committed to transforming the way we treat our environment. I take this opportunity to put on the record my thoughts about the conference and its outcomes—or, rather, the lack thereof.

I attended Rio+20 as the Australian Greens spokesperson for the environment, with the aim of seeing how governments, particularly ours, engage in multilateral negotiations; engaging with the experts and civil society who use these conferences as a global gathering and ideas forum; and being a voice for the Greens and the community, an alternative voice from government about what Australia is and is not doing to deliver a biodiverse and sustainable future, and without the greenwash. 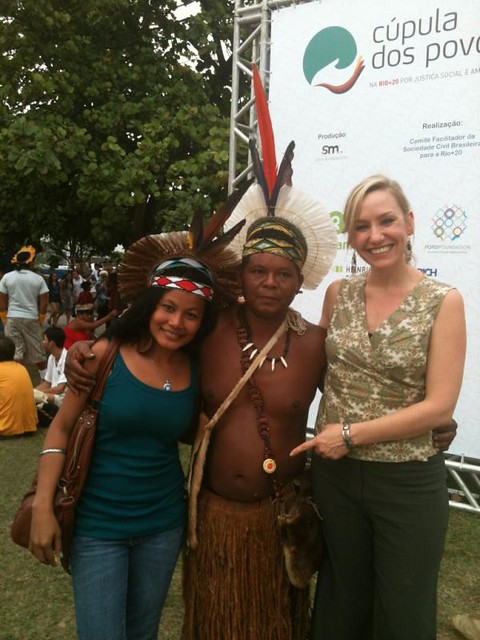 Before going, I commissioned a report by an independent expert on Australia's delivery of our international commitments since that original Earth Summit—our record over the last 20 years. Sadly, the report found that, since the original Rio conference, Australia has become a world leader in failure, being responsible for more gas emissions per person, more habitat loss and greater biodiversity decline than any other developed country. The report concluded that we are living way beyond our ecological means, despite being a wealthy country with the means to address environmental protection. For the 45,000 participants, 188 countries and over 100 heads of state and government, I like many others had hoped that collectively we could face our environmental crises and that together we could act to address them. I had hoped for a strong outcome. This was the biggest UN conference ever held, yet it may well come to be regarded as its biggest flop.

The week before the arrival of heads of state, diplomats met in Rio and worked to negotiate a 100-plus page text in numerous breakout groups. Progress was painfully slow and convoluted, with many issues remaining unresolved. Just prior to the arrival of the heads of state on Wednesday, 20 June, the hosts, Brazil, eager for an agreement at any cost, simplified, streamlined and reduced it to a highly uncontroversial document which all of the countries' diplomats then accepted. Twenty years after making laudable commitments to sustainable development which spawned three international conventions, the world's diplomats took no steps forward despite the needs of this planet and its future generations. The entire draft document was an exercise in rhetoric. It lacked any meaningful new commitments and it was a mere restatement of 20-year-old goals which have still not been met. It was farcically weak text, crying out for strengthening by world leaders.

But, when the heads of state arrived in the last few days of the conference to find an unambitious deal stitched up, rather than stepping up to show leadership and tackle the great global environmental challenges that we share, nobody braved reopening it. It is unclear if Australia even pushed to reopen the text of this weak agreement once the Prime Minister arrived, or if she was content to see the 20th anniversary of the world's most important sustainable development conference wasted. The end result was a 49-page document which was largely a restatement of 20-year-old goals which still have not been met. It contains 59 uses of the word 'reaffirm' yet no timeframes or proposals as to how to achieve those goals.

Alarmingly, the Prime Minister expressed satisfaction with the outcomes of Rio+20, despite widespread condemnation by environment and youth groups, the community and many of the participants of the failure to commit to any new goals or to produce anything tangible. In some instances the world took a huge step backwards, such as acceding to the Vatican's demands that reference to women's reproductive rights be deleted from the text.

On the much lauded Sustainable Development Goals, which were intended to replace the Millennium Development Goals which are due to expire in 2015, we have not an agreement on the wording of the Sustainable Development Goals, and not an agreement on the issues that such goals should cover, but an agreement to put on the agenda of the next UN General Assembly meeting the need to establish a working group to develop the goals to be agreed by the General Assembly. So we have an agreement to add an agenda item to the next UN meeting. On oceans, there was some slow movement but the final text simply says that countries should do more to prevent overfishing and ocean acidification, without specifying what or by when.

Australians are horrified at the world's failure to act, and deeply concerned at Australia's push to water down the mining sections of the agreement. The text on fossil fuel subsidies reaffirms G20 commitments but lacks implementation timeframes and strong encouragement for other countries to follow suit, despite huge community concern for the over $7 billion in subsidies given by the Australian government to polluters. The power of Australian mining barons was on full display, as our diplomats pushed for so-called 'sustainable' mining and watered down the fossil fuel subsidies text to promote 'efficient' subsidies to wealthy mining giants. I am afraid there is no such thing as an efficient fossil fuel subsidy, and multibillion dollar tax breaks and handouts are subsidies—so the Prime Minister's comment in Rio that 'Australia is not in the business of fossil fuel subsidies' must now result in the cancellation of the $7.3 billion in subsidies paid to big polluters annually.

Australia's push to include in the Rio draft agreement text supporting 'sustainable mining' on the spurious basis that it can help local communities flies in the face of all evidence in Queensland's mining towns, which are suffering the effects of skyrocketing costs of living, social pressures and the two-speed economy. So the ultimate Rio+20 declaration is a document without mention of planetary boundaries, tipping points or the earth's carrying capacity. It is hard to maintain hope in the face of glorious multilateral failure, but I do.

This brings me to the positive aspects of Rio+20. The highlight was attending some of the over 500 side-events run by UN agencies, governments, think tanks and civil society on key sustainability issues. In a summit of global legislators from over 85 countries, we parliamentarians as voices for the world's people all agreed on a protocol committing to sustainable development principles and to working in each of our nations for progressive environmental laws and making sure our international commitments are domestically implemented.

Another highlight was meeting Greens from around the world. The Greens are the only global political party, and I met several Greens environment ministers. I met Greens from countries like Morocco, fighting for women's rights, and from the Ukraine fighting for democracy and against political prisoners and even from persecution for running for election. It made me appreciate the democracy we have here in Australia and how our community needs to grab it with both hands and use it, use that freedom, and fight for our future.

The other heartening aspect of the conference was the hope and determination in younger generations. There were many youth groups represented at the conference, as well as non-government organisations. These young people are our future leaders, and their hope was inspirational. Many parts of the conference were decorated with artwork, much of it by young people who were speaking to the representatives as they made their way to the negotiation tables. One message said it all: 'The future depends on the decisions we make today'.

That is why even though Rio+20 was a failure, and all it achieved was the absence of backward steps on 20-year-old commitments which have not been delivered—which was depressingly sold as a win—our future still depends on the decisions we make today, here in this parliament. The failure of any new commitments at Rio+20 makes strong domestic action all the more necessary to tackle the world's environmental crises. Australia must turn around our biodiversity crisis, it must properly protect marine reserves, it must slow down the mining boom, it must protect the Great Barrier Reef from coal export explosion and it must ditch fossil fuel subsidies.

The Prime Minister should start by demanding that Minister Burke strengthen, not weaken, our environmental laws. We are a wealthy country and we can better afford environmental protection than many other nations. Our natural wealth is unparalleled and our grandchildren must thank us for what we do. I still believe that they will.

This speech can also be found on the Senate Hansard website.  For more information about Senator Waters' trip to Rio, visit her Rio page